I’m a lifelong resident of East County and, for the past 25 years, I’ve lived four miles from Green Valley Falls. Until last week, I had never heard of the Airplane Monument hiking trail just north of Green Valley – literally 4.5 miles from my house.

On New Year’s Eve, I joined two companions for a day hike up this historic trail in the Cuyamaca Mountains. At only 2.6 miles one way, with some inclines, it’s not a difficult hike, but gives a lot of aerobic exercise due to the hills. As a 58-year-old woman with some extra weight to carry, I found it do-able but a great workout. My companions, seven and eight years younger than me, were great troopers in waiting for me bringing up the rear.

We followed various directions that we found online. Most stated to park at the area just north of Green Valley Falls campground (federal parking permit required, which you can buy at many places, including Perkins Market in Descanso).

From the parking area on Hwy. 79, you will need to head a little east to pass the Sweetwater River Bridge, then cross the road heading north.

Looking back on our guide tools, most said to turn left to the southwest; we, however, turned right to the northeast. That was okay, because it still took us in the right direction, as the trail is a loop. You can’t go wrong either way. Unless, like us, you PASS the sign for the Airplane Monument and go a mile or two out of your way (downhill, which requires returning uphill — I hate inclines).

We heard voices and ran into a very nice UCSD student with this mom and younger sister (I didn’t mention my SDSU affiliation). Unlike us, he actually had a real map and the bible of all bibles: Jerry Schad’s Afoot and Afield in San Diego County. He let us know the error of our ways; we had passed it our destination a mile or two back.

They were heading that way, but with him being a young hiker, and we being baby-boomer middle aged women, they went way ahead of us. Still, we knew we were on the right track. The error in our ways actually gave us a very good view of Stonewall Peak. And another hill to hike up. It’s all good. (Did I mention I hate inclines?)

We made our way to a fork in the road then noticed the sign with very small print stating “Airplane Monument.” Again, we’re middle-aged women – we often miss small print. The other thing we missed was the arrow the UCSD student made for us: he went out of his way to construct sticks into an arrow shape just for us. How sweet of him. How blind of us to miss that. It was only 1.1 miles from the point, and it was a pleasant hike. After what seemed like two miles (or more, at least to me), we finally were getting close to this historic site. Within just a few yards, we ran into the UCSD student and his mom and sister coming down. “How much farther,” one of my companions asked? “You’re there,” he said. “Did you see our arrow we left for you?” No, but what a sweetie pie he is. And he wasn’t even an Aztec.

We made it! Breathe. Drink water.

Here is the history of the place:

“The monument is a Liberty 12-cylinder aircraft engine mounted on stones. The engine is from a DH-4B biplane that crashed on December 7, 1922. An Army pilot, First Lt. Charles Webber, volunteered to fly Col. Francis Marshall to Arizona from San Diego to conduct official military business in Fort Huachuca. Due to inclement weather, Webber turned back to San Diego. Shortly after reversing his course, the plane experienced engine trouble, and without a radio to communicate their engine failure, Webber and Marshall crashed into the ridge below Japacha Peak. Neither Webber nor Marshall survived. Search-and-rescue teams failed to recover the men and their plane after months of searching. Five months later, a local rancher by the name of George McCain found the burned remains along with the airplane wreckage. The engine block of the DH-4B biplane was mounted as a memorial for the World War I veterans.” (http://www.sandiegoreader.com/news/2013/oct/23/roam-airplane-monument/) 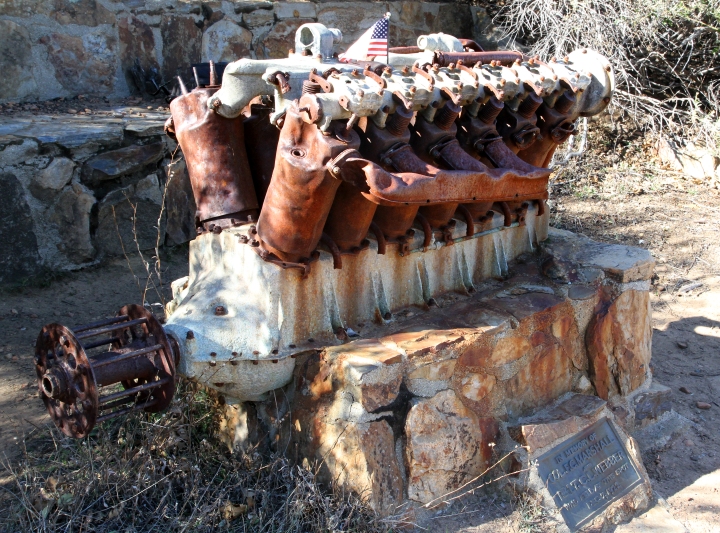 The Airplane Monument affords some great views of the East Mesa and north in the Cuyamaca Rancho State Park. Having hiked in these areas for many decades, the sad thing for me is seeing the devastation that the park endured from the 2003 Cedar Fire. There are what I would call carcasses of very old oaks and pines; things that will never return in my lifetime, nor the generation after me. Yet, I did find a strange beauty in what survived and the remains of those that did not.

New life springs up. It is the oldest lesson of life, isn’t it?

·      Bring water. Lots of water. Even a small hike requires at least 2 liters per person.

·      Other things that can come in handy: Kleenex or toilet paper; wipes; a bag for trash (to take out – a must); cell phone (service can be spotty but might be available). A camera (or iPhone). Photos are priceless.

·      Easily accessible pepper spray (not like the situations in Law and Order, but the Cuyamacas are mountain lion territory, in addition to coyotes). Have pepper spray ready for an emergency.

·      Speaking of dangers: do NOT hike alone. On our way back, we ran into a young woman heading into the wilderness alone. Remember Iris Kenna, a seasoned hiker (http://articles.latimes.com/1994-12-12/news/mn-8173_1_san-diego-woman)

·      Dress appropriately: good, sturdy shoes; a hat; sunscreen; long pants to ward off ticks; but appropriate for the weather.